© 2021 City Osteopaths
ACC Data:
According to the ACC National Service Report of June 2016, for the conditions of lumbar (low back) sprain, neck sprain, sacroiliac sprain and shoulder and upper arm sprain, Osteopaths were more likely to require 0-5 treatments compared to physiotherapists who were more likely to require 6-10 treatments for these conditions. Also, under Osteopathic treatment 96-99% of injured patients were returned to independence, compared to 60-65% for those patients receiving a mix of clinical services.

Osteopathy is a system of manual medicine that looks at the relationship between the body's physical structure and its impact on physiological processes.

Manual medicine refers to the use of the hands both in the examination and diagnosis of mechanical imbalances within or between physical structures, and also in the correction of these imbalances.

Physical structure refers not just to the musculoskeletal system (although this is very important), but to all tissues that make up the human organism.

The body's inherent capacity for health, homeostasis and self-repair can be impeded by imperfect structure and motion of any part of it. Osteopathic treatments involve a gentle, effective hands-on treatment following whole body Osteopathic diagnosis.

Osteopaths must be registered with the Osteopathic Council of New Zealand (OCNZ) which is the governmental registration body for osteopaths set up under the Health Practitioners Competency Act in 2004. New Zealand Osteopaths are registered ACC treatment providers.

In the United States, Osteopaths are medical doctors and there are Osteopathic hospitals, however the model chosen for New Zealand and Australia is Registered Osteopaths as primary healthcare physicians who use their hands rather than drugs to assist the body back to optimal health.

The word "Health" is an English noun referring to the overall soundness or condition of an organism. Osteopaths also like to think of health as being a verb; that is, the action of striving to optimise the condition of the organism.

Many of us have heard of this concept before, under the name "homeostasis", meaning "stay the same." For the osteopath, this word contains entirely the wrong connotations - there is nothing "static" about it. Maintaining a state of health is a constant dynamic battle to overcome the never-ending stream of insult and injury that characterises life. Health is about bouncing back. Health is not just that which protects us from bacteria and virii, but also that which maintains our blood pH, heals the cut on our finger, and maintains our positional sense to remain upright in Wellington's notorious wind.

Health is, to the osteopath, not a state of being without disease, but an optimum ability to withstand and self-right from insult or injury.

I haven't heard of Osteopathy before - is it new?

No. Osteopathy has existed in its modern form for around 150 years, but this incarnation is best understood as just the latest chapter in manual medicine, which has probably existed for much longer than human civilisation - since the time when primitive man first instinctively rubbed an ache. The oldest confirmed written record is possibly that of the Tomb of Ankh-Mahor in Egypt, a VIth Dynasty Pharoah who died in 2340BC. Since that time, manual medicine has sprouted forth all over the globe and persisted for one simple reason - it works.

Modern Osteopathy was founded by Dr Andrew Taylor Still, an American physician, in the mid-1870s after he became dissatisfied with orthodox medicine.

Dr Still observed that patients who were ill often had irregularities in the alignment of their spines and he became certain that many illnesses arise when part of the body's structure is misaligned or not moving properly. He reasoned that adequate function of the body's physiological systems depends on unimpeded blood and nerve supply. He was able to alleviate or cure his patient's illnesses by manipulating joints and soft tissue.

His simple techniques were effective (true to the history of manual medicine), but more importantly his philosophy paved the way for further advances guided by a new understanding of health and disease. He said "My aim is to make the osteopath a philosopher, and place him on the rock of reason." The last 140 years has seen osteopathic practice spread throughout the globe and incorporate the latest advances of science, experience and observation while remaining true to its philosophical underpinnings, namely: The body is a unit. The body has self-healing and self-regulatory functions. Structure and function are reciprocally interrelated. The goal of the osteopath should be to find health; anyone can find disease.

What is Cranial Osteopathy? 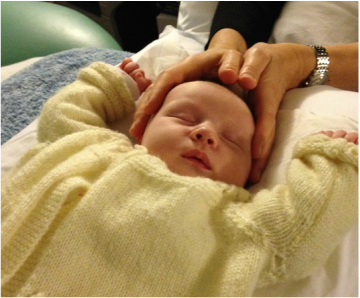 Many of our osteopaths practice Cranial Osteopathy, which is a specialised diagnostic and treatment approach following on from the discoveries of American Osteopath Dr William Garner Sutherland in 1898, who observed that the various bones of the cranium (skull) fitted together in a way that permitted (small) motion.

Subsequent study found that not only was motion present within the skull, but that slow rhythmic motions (independent of breathing and heart-rate) also existed elsewhere in the body. Nowadays "Cranial Osteopathy" is practiced all over the body, but the name remains, in homage to Sutherland's original discovery. This motion has known many names over the 100-odd years since, including Cranial Rhythmic Impulse, Inherent Motility, and the Involuntary Mechanism, although today it is most commonly referred to as the Primary Respiratory Mechanism (PRM).

The PRM consists of very slow motion. The slowest regularly observed rhythm has a cycle of approximately 100 seconds. Motion present includes Traube-Hering-Mayer (THM) vasomotor waves and independent metabolic motion. Cranial osteopaths diagnose and treat various characteristics of the motion observed using a finely-tuned sense of touch. Not all osteopaths are trained in Cranial Osteopathy and it takes many years to become skilled. This treatment approach is gentle and very appropriate for babies, children as well as adults.

What is the Biodynamic Model?

Where traditional Cranial Osteopathy had concerned itself with tissue lesions preventing full expression of the motion of the PRM, the Biodynamic Model was interested in the movement itself. Blechschmidt's work had established a correlation between subtle movements and metabolic fields in the developing human embryo, and Jealous began to investigate the effect of these movements on metabolic activity in adults. Jealous found that not only were developmental movements of the embryo and primary respiration (PRM) in the developed human one and the same, but that there appeared to be a correlation between primary respiration and the potency of self-repair (health) itself.

Thus a cranial osteopath working biodynamically is not concerned with tissue lesions, but with the direct apprehension and optimisation of the faculties of self-repair and self-correction.

An Osteopath working with the Biodynamic Model seeks first and foremost to understand Health as a verb.
​

Osteopathy in the treatment of Infants and Children and Adults

Birth
A baby's passage through the birth canal is a difficult process and nature ensures that the bones of the skull are pliable enough to overlap to enable this to happen. Sometimes the bones do not return to their normal positions after delivery. This can happen if the labour is unusually long or short, if there is a large baby passing through a small pelvis, if a baby has a large head or if intervention is necessary for example a forceps delivery or ventouse extraction. A Caesarian birth may involve trauma to the baby who is stuck in the mother's pelvis. Alternatively, problems can occur in utero if there is insufficient amniotic fluid.
When to Seek Treatment for infants
Cranial whole body diagnosis requires an acutely trained sense of touch coupled with a fine discrimination as to the dysfunctions present in need of correction, and this can only be learned by years of study and training under skilled instruction.

Cranial treatment is extremely gentle, is suitable for infants, children and adults of any age, and involves no pain for the patient.
Research evidence on safety of Cranial Osteopathy: http://jaoa.org/article.aspx?articleid=2093194

An Australian Registered Osteopath, John Smartt, has written a very useful, well researched and referenced document about Osteopathy, that you can download here